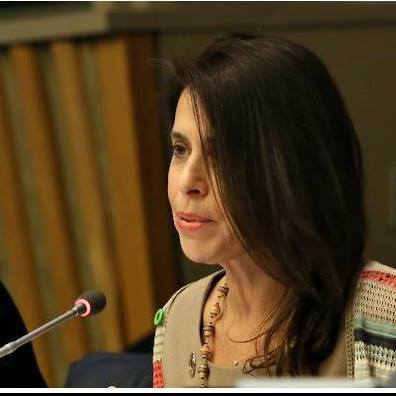 Like most of our Climate Mamas and Papas, Harriet has worn many hats over the course of her life. She has been a ski instructor in Western Canada, an orchard worker in Israel, and even a member of her college sky diving club!  A new hat that Harriet is now proudly wearing is that of author. Her book, How to Talk to Your Kids About Climate Change, Turning Angst into Action published by New Society, is available everywhere!

Harriet will tell you however that the most important hat she wears is one she put on in 1998 and continues to wear to this day, and that is Mom to her two children, Elliot and Alana. Becoming a mom heightened Harriet’s desire to find a way to make the world a better place not only for her children but for all the children around us, even the grown up ones. Through her work on climate education and advocacy Harriet has found positive and powerful ways to channel her passions to create opportunities that raise awareness and amplify diverse voices and actions on the most important challenge we will face in our lifetime - our climate crisis. With support from her incredible husband Andrew, Harriet is tackling this her own way, as she tackles all the challenges she takes on in her life.

Harriet is the author of the 2020 award winning book, How to Talk to Your Kids About Climate Change, turning Angst into Action.  In her spare time, she established the NYC Metro Climate Reality Project and served as it's first chair. Harriet is the Board Chair of Young Voices for the Planet and works with and advises many local, regional and national environmental and social justice organizations.  She was a national organizer for the 2014 NYC Peoples Climate March, the September 2015 Moral March on Climate in Washington, DC, the Climate Justice Contingent for the 2017 Women March on Washington, and the 2017 Peoples Climate Movement March in Washington, DC. Harriet teaches Climate Change and Society - a class she created -  and World Sustainability, at Ramapo College of New Jersey.  On the 50th Anniversary of Earth Day, April 22nd, 2020 the Human Impacts Institute and the New York City Department of Transportation opened an exhibit where Harriet is featured as one of 29 NYC Climate Heroes. (The exhibit is virtual for now, but the plan is to have the Climate Heroes display line Broadway in New York City from Union Square to Time Square.) Harriet was chosen by Circle of Moms as one of the top 25 Eco-Friendly Moms and by Next Tribe, in their Women of the Year acknowledgements, as a Planet Protector. Harriet regularly writes for or is interviewed by a wide range of national and local media outlets and organizations including: Lifetime TV's The Balancing Act, Christian Science Monitor's Modern Parenthood, Safer Chemicals Healthy Families, MSNBC, The Global Team of 200, The Green Divas Podcast, Rodale News, Maria's Farm Country Kitchen, REI, Global News, Parents Magazine and the Healthy Child Healthy World Network. As well, Harriet sits on various boards and actively supports the work of international, national and regional climate, justice and education organizations, including: WECAN's US Women's Climate Justice Initiative Steering Committee, Young Voices for the Planet,  Our Kids Climate, Network for Responsible Public Policy, Dear Tomorrow, Teach Climate and Climate Psychology North America.

Harriet works with an exciting team of talented individuals, who regularly contribute to ClimateMama through advice, comments, guest blog posts and best practices.

Thank you for checking us out. We look forward to having you join us on our journey to make our world a safer, healthier, and more just home for all.