Neil Armstrong: “One Giant Leap for the Ocean” 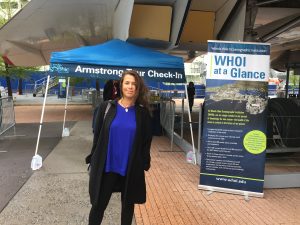 On Friday, May 26th I was honored to be invited to tour the R/V (research vehicle) Neil Armstrong, which was docked next to the Intrepid Air and Space Museum on the Hudson River in New York City. This US Navy research ship was in New York to take part in the 2017 Fleet Week festivities. The R/V Neil Armstrong is owned by the Navy and operated by the Woods Hole Oceanographic Institution (WHOI). The ship is one of only seven US academic large ships, and a “dwindling number of small and medium sized ships” tasked with exploring 2/3rds of our plant’s surface.  After our tour, the R/V Neil Armstrong was heading back to Woods Hole, MA to be deployed on a research mission to the Pioneer Array. I learned that the Pioneer Array is an Ocean Observatory, about 100 miles off the coast of Massachusetts  that uses advanced technology to help gather detailed information on sea temperature, winds, wave height and currents. This was the first visit of the R/V Neil Armstrong to NYC’s Fleet Week, and included our special social media outreach tour so we could share more information about the ship and its mission with you. 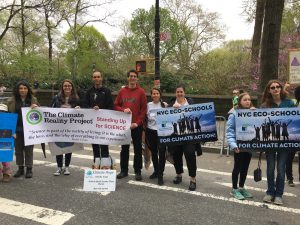 Standing up for science and facts is something we all must do, particularly as we in America live through this era of “alternative facts.”  On April 22nd, 2017 – Earth Day – scientists and their supporters across the United States took to the streets, marching for science and against the current  US administration’s plans to  severely cut funding for science research in general and in particular for climate science research. As well, scientists and regular folks continue to speak out as senior officials in the US administration raise doubts about proven climate science.  We – as parents and voters – must stand strong and speak out to support scientific research and the means and mechanisms through which scientific data can be collected and studied.

Now more then ever research and understanding of what is happening to and in our oceans is critical. As Climate Mamas and Papas we know that through scientific study we are learning how our oceans are absorbing much of the carbon dioxide and other greenhouse gases we are creating from human activities like the burning of fossil fuels. We are already witnesses to some of these consequences, including ocean warming and increased acidity, that have potentially devastating consequences for our coral reefs, marine animals, fish stocks, sea shores and previously steady and constant ocean currents. 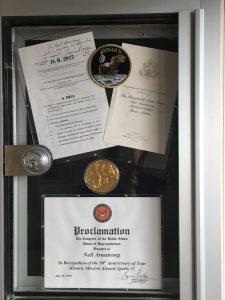 Astronaut Neil Armstrong will be remembered always as the first person to step foot on the moon. His words, as he took that first step, continue to echo around the globe: “One small step for man, one giant leap for mankind.” The US Navy honored Neil Armstrong by naming it’s first ship in it’s newest class of research vessels after him. This ship is designed for exploration and discovery, something Neil Armstrong new and understood well. We must make sure that we do what we can to help the science community  continue to carry out Neil Armstrong’s work of discovery and exploration. We have so much to learn from our world’s oceans – they are deep and mysterious, just like outer space. The R/V Neil Armstrong was christened by Carol Armstrong, the ship’s sponsor and Neil’s wife, on March 29th, 2014.

Here are a few interesting facts to share with the kids in your life about the link between the vehicles that conduct outer space exploration and those exploring our oceans. 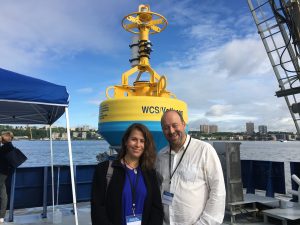 With Gavin Schmidt, Director of the NASA Goddard Institute for Space Studies

According to the Woods Hole Institute which operates the R/V Neil Armstrong: “NASA’s space shuttles were all named after famous ships that explored the ocean: Endeavor, after the ship Captain Cook sailed to discover Australia and New Zealand; Discovery, after the ship that founded the colony in Jamestown, Virginia and later explored the Northwest Passage; and Atlantis, after the nations first ship build expressly for ocean research.” The Neil Armstrong primarily explores the Atlantic and points east and it’s sister ship the Sally Ride, based at the Scripps Institute in California, primarily explores points west. Both ships conduct research in tropical and temperate oceans around the world.

Stay tuned for more posts on the R/V Neil Armstrong, and the work of the Woods Hole Oceanographic Institution. We are excited to learn more and share what we learn with you!

Also, do check out the Woods Hole Institute Website with your kids. Learn more about it’s mission together, and keep tabs on the work and journeys of the R/V Neil Armstrong.

P.S. Did you know that between June 5-9th, 2017 the United Nations will be hosting the Ocean Conference, in New York City and that June 8th is World Ocean’s Day?   Learn more about our oceans and why we need to understand more about their health and our impact on them; help your children learn more too!

3 Responses to Neil Armstrong: “One Giant Leap for the Ocean”