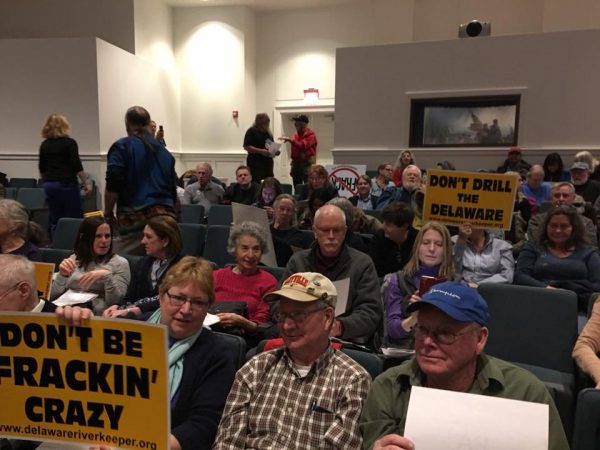 In  early December, the Delaware River Basin Commission (DRBC) released  draft rules on permanently banning fracking in the Delaware River Basin. The rules are a mixed bag, peranently banning fracking operations in the Basin –  but at the same time allowing the disposal of fracking waste in the Basin, as well as permitting water withdrawals from the Delaware River Basin, to be used for  fracking operations elsewhere. The public will have a chance to comment on these draft rules at four upcoming public hearings –  two on January 23 in Waymart, Pa., and two on January  25 in Philadelphia. You can sign up to attend the hearings and for the opportunity to be listed as a speaker  here.

Written comments can be submitted online until Feb. 28. The commission is expected to take a final vote on these rules later in 2018.

Climate Mama extraordinaire, Rachel Dawn Davis shares with us why it is so important to HER and why it should be important to all of US that the Delaware River Basin is NEVER  opened for fracking operations – of any kind. Wednesday December 13th, is the next regular business meeting of the Delaware River Basin Commission (DRBC) . Join Rachel at this next meeting and have your voice heard.

Below in her own words, is Rachel’s story.

We each have a role to play in our communities, defending public lands from powerful interests. It has been happening for centuries and at this juncture, Donald Trump is doubling down on fossil fuels and threaten the health and wellbeing of every nation on earth. It is up to state and local leaders to chart a path forward for clean renewable energy, and right now the Governors of NY, NJ, PA and DE have a chance to do it in the Delaware River Basin by voting to ban fracking and fracking waste in this critical watershed.

The fight over fracking in the Delaware River basin is not a new fight, in fact 6 years ago, I was working with community groups across the region to ban fracking in the Delaware River Basin. I was pregnant with my first born a the time. Saying this makes me think about how Trump can say he is pro life while promoting fossil fuels that are poisoning communities and warming our planet, literally jeopardizing life as we know it. What is pro life about that?

I digress… .Here’s a true story about the time I told my Food & Water Watch Director I was pregnant and an urgent plea to join me and others on December 13 to prevent fracking and fracking waste dumping from invading the Delaware River Basin. Please sign up NOW to speak on Wednesday, December 13th!

I think back to the Fall of 2011, when I was driving to the University of Delaware, attending on behalf of Food & Water Watch – yet another press conference –  with no press. This was following the Shale Gas Outrage conference and activist training thereafter (I wrote about this on Climate Mama years ago). I glossed over this piece of it but realize it’s something to point to, especially now. 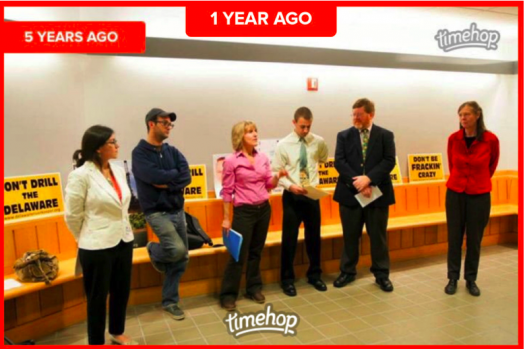 November 14th, 2011 was my birthday.  I had coordinated for the photography of the event – meaning a photographer would be paid to cover this event –  and it could be captured, regardless of press attendance.  The press didn’t attend. In a corner of the student center building we talked to ourselves about the number of petition signatures and measurable threats to groundwater, soil, etc. that would result from allowing a moratorium on fracking in the Delaware River Basin be lifted and Josh Lopez took pictures. We spoke, representing the lands of Delaware, New Jersey, New York, Pennsylvania and the nation. After heeding that advice from Sandra Steingraber and surrounding myself with water and food protectors, I was 8 weeks pregnant and hadn’t told anyone but my husband.

Before returning to New Jersey and wherever Josh the nomad photographer would be heading next, we went to meet/eat at the Iron Hill Brewery. On our way back from me eating a huge, expensive, delicious black bean veggie burger, the little sesame seed growing inside me and I stopped and looked up. I had noticed a huge banner picturing Governor Christie with event details for Wednesday of a speaking engagement he would be participating in as an alumnus of the University of Delaware. At that juncture, Delaware’s Governor had not stated where he would vote in any press statement. From a strategic perspective, perhaps he needed some pressure to take a stance publicly as PA, NY and NJ had.

After I called to report this juicy development to Jim Walsh, then Food & Water Watch Northeast Region Director (operating out of the budding NJ offices in New Brunswick) I could hear his excitement over the phone. We would bird dog the Governor and educate people about this upcoming vote. After all, I had found out where the New Jersey DRBC representative would be, and when.  I wondered how many people even knew what the DRBC was, let alone why it was formed. I know driving calls into offices is a key factor that helps drive policy change.

No press coverage when big name organization representatives, including an award winning filmmaker, Josh Fox addressed the DRBC by name. All that work and this last ditch effort to educate the campus and drive calls into Markell’s office got press to bite.Two cars of maybe 6 people each got Associated Press coverage. We piled into cars that morning. Driving, while Jim was accepting calls from press and conference calls with other state organizers, we were shuffled around as we made pit stops and colored in signs with markers.

Wow, were our interns getting a good insight into what political activism looks like at the grassroots level. It rained most of the day as we descended on the campus, around different buildings in legal jurisdiction. All hands on deck-boots on ground. I stood, breaking my green daisy pattern rain boots, still newly pregnant, passing out flyers we made, asking students to make calls on the spot. The local university police got wind of us and Jim risked arrest. The calls were working but I was eager to eat and sit.

We waited outside in line for the event and helped inform UDel alumni and other non-student attendees about the impending vote to frack the Delaware River Basin. Wouldn’t you know, the Delaware Governor not long after that shared in a statement that he would be voting with New York not to lift the moratorium. When we got word of the no-vote, I was driving back home from a press conference put together by a group of North Jersey activists I helped empower/organize. That’s when Jim called me.

I answered, “Hey, Jim! Guess what? 40 people and press came to our rally in Ridgewood!’ ‘Really? That’s great! Guess what?!?! We won! The DRBC will NOT vote tomorrow!’” When I first heard it, his excitement was contagious so while my face was smiling big I replied “Whaaaaat?” I was confused by this and frankly, 6 years later, I am still confused. Why didn’t they vote? I know, I’m being naive. But how is it possible that a no vote is held, simply because the nay’s would have had it? Why would I still have to work on this for the future inhabitants of this land, including my future children? Why not then?

Jim all but ordered me to come celebrate at the New Brunswick, New Jersey offices and asked what alcohol I like to drink. “Nope, none for me thanks!” I just kept turning down offers to get my choice libation and he kept insisting, elevating the shrill tone in his voice.    Finally, I blurted out, “JIM, I’M PREGNANT!” Having a little girl himself whom he adores, he so not candidly (blushing in happiness) poured me orange juice when a bunch of us got ready to toast each other.

At the rally we held in Trenton anyway in lieu of the vote to not vote, Mark Ruffalo – who recently wrote the foreword to the Delaware Riverkeeper, Maya Van Rossum’s new book The Green Amendment –  hugged me and said I shouldn’t be bummed because we won this battle. Battle? I didn’t think it was played fairly and winning to me meant banning fracking and operations in the Delaware once and for all. Unpredictable legislative strategies are opening our land up for fracking craziness. I was advised to procreate back in 2011.

Regardless of the sizeable volunteers and supporters we corralled during that lead up to the battle at the Delaware River Basin Commission meeting, the no vote stood. Despite the fact that no drilling has happened in the basin, it did and still does not feel victorious. And now, six years later, I have two children and a dog. A bird-dog, if you will. Our children have grown and want inhabitable places to live, and play and know who is keeping them from this reality. They know right from wrong.

“We need more parents and people like you,” Sandra Steingraber shared. I guess we have another chance now in December of 2017. Across generations, we see right through industry’s hold on this commission and its ineptitude to carry out its original mission, given the fickle nature of political elections and appointments. 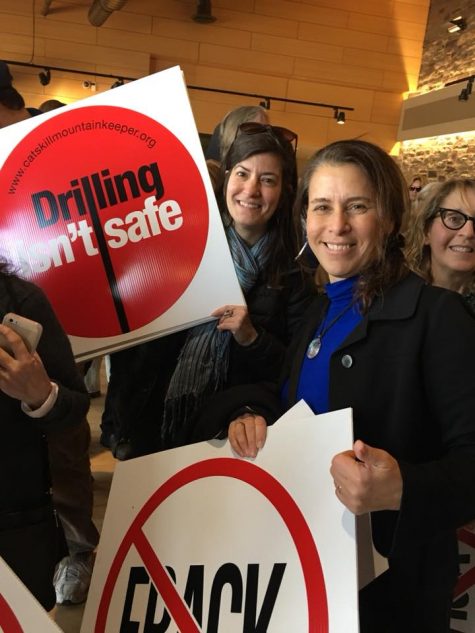 Now we have an opportunity for what could be another unsatisfying victory. While the Delaware River Basin Commission is considering a ban on fracking, but through omission from draft regulations published last week, they will still leave the Delaware River Basin open to fracking waste dumping. If fracking or fracking waste dumping are allowed in the watershed, the drinking water of millions of people could be impacted. If that is not enough, the land will be ruined enough impacting tourism and some of the most beautiful places in the region. Places where families camp, hike, and boat throughout the year.

Once again, I ask you to join me and others on Wednesday at the DRBC meeting in Washington Crossing, PA.

Since the Teaneck schools taught me that facts matter, I am going to leave you with some facts that matter:

FACT: Oklahoma has been experiencing earthquakes due to fracking operations and under reporting is leaving this story unnoticed. FACT: Oklahoma is not on any fault lines.

FACT: People working together can stop fracking, at the state and country levels.

FACT: People operating energy extraction have been working for years to avoid needing public trust to move forward in fossil fuels exploration and the accompanying pollution.

FACT: Mother Earth is one woman being raped and pillaged for no good, only misguided greed and madness. For her and the habitats she supports, we should be behooved to build serious momentum for a Green Amendment and a roaring green economy.

FACT: “Never doubt that a small group of thoughtful, committed citizens can change our world; indeed, it’s the only thing that ever has.” ~Margaret Mead

FACT: You can help prevent fracking operations from ravaging the Delaware River Basin, attend an upcoming meeting on the draft rules, and/or join Rachel as the upcoming business meeting of the DRBC on 13th December.

Rachel Dawn Davis is a Sustainability Strategist and operates Green Dawn Solutions LLC from the forestland of  New Jersey. She holds a M.S. in Sustainability Management from The New School for Public Engagement and a B.A. in Economics from Rutgers University

This entry was posted in Climate Mama News, Disasters, Do Something Wednesdays, fracking and pipelines, In The News, Take a Stand: Action & Advocacy. Bookmark the permalink.

One Response to Don’t Frack the Delaware: Make YOUR Voice Heard