How “Green” are YOUR Super Bowl Teams?

Our friend and Climate Reality buddy, Lew Blaustein has a wonderful blog where he writes about the intersection between sustainability and sports at the GreenSportsblog. With Lew’s permission, we are happy to share a recent post he wrote that helps us “score” the two Super Bowl Teams, the Denver Broncos and the Seattle SeaHawks, by how GREEN they are. This post was a great conversation piece around our dinner table recently. My 14 year old daughter and 16 year old son, both avid New York Giants fans, loved it! Check in with your kids, and see what they think.

The Rules: To “score” the Green Sports Bowl I, the GreenSportsBlog identified 4 greening categories and awarded points to one or both teams. One team was given more points than the other in each category. According to Lew: All decisions are final–there are no replays/reviews.

1. WHICH CITY IS GREENER? 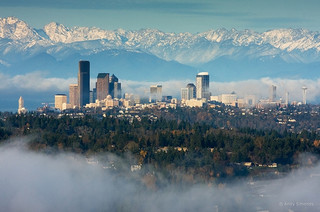 This hugely important category was challenging to score because of the subjective nature of the question. The good news is both cities rate highly in the many studies and stories ranking the US’ greenest cities. Seattle gets points for generating “over 90 percent of the city’s power in the form of hydroelectricity” and its “two global warming initiatives, Seattle Climate Action Now and Seattle Climate Partnership, [which] have distributed thousands of home energy efficiency kits to residents and urged over 100 local businesses to reduce their greenhouse gas emissions.” (Yahoo, 2012). Denver earns its spot at or near the top of most lists in large part due to its “200 parks within the city limits, 850 miles of dedicated bike trails and 29 recreation centers” (Yahoo, 2012) as well its strong management of its precious water resources.

Most of the rankings placed Seattle slightly ahead of Denver, with one exception. Here are some examples (all polls/studies cited are from 2012):

▪ A study by the U.S. and Canada Green City Index and Siemens ranked Seattle #4 and Denver #5, based on a series of 31 qualitative and quantitative metrics, including CO2, energy, land use, buildings, and transport. San Francisco was ranked #1 but they couldn’t get that last TD on Sunday so they’re out of the discussion.

▪ Canadian media company Corporate Knights, conducted a similar study, this one based on 38 metrics, slotted Seattle in a 1st place tie with Portland (the Rose City gets a TON of love for Greenest US city in most such surveys) and San Francisco with 35 “green points”. Denver is right behind at 33.

▪ Seattle checked in at #3 and Denver at #8 in Yahoo’s Top 10 Greenest US Cities poll. No metrics were provided so perhaps this was more opinion than anything else.

▪ A Travel & Leisure reader poll gave Denver (#4) the nod over Seattle (#6), with the Mile High City scoring points for its “most athletic” and “outdoorsy” residents.

2. WHICH STADIUM IS GREENER?
Sports Authority Field at Mile High in Denver (2001) and Seattle’s Century

Link Stadium (2002) opened in the pre-LEED stadium construction era but the Seahawks (and MLS’ Sounders) owner and Microsoft co-Founder Paul Allen made green building a core part of its stadium’s DNA, as highlighted in this comprehensive Natural Resources Defense Council (NRDC) case study. The Denver Metropolitan Football Stadium District, owner of Mile High, seems not to have made the same commitment.

Now, both get points for operating “green-ly”, in terms of recycling, composting, energy efficiency and mass transit access (light rail and bus). And we’ll give Denver a field goal for a strong bicycle access program and another for having a grass field while Century Link’s is artificial. Seattle gets a field goal for having EV Charging Stations and another for on-site solar (yes, solar can work in rainy Seattle).
But the deciding factor in giving the Seattle the clear nod is Allen’s commitment to green building.

3. WHICH SQUAD HAS MORE ECO-ATHLETES? 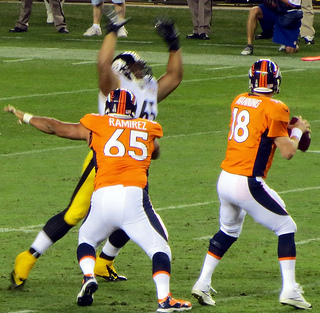 The short answer, sadly, seems to be neither because no one on either team has established a green-focused foundation and none has spoken out on climate change. This is not surprising as the number of Eco-Athletes overall is very small. That said, the Broncos are awarded a field goal because (and this is a stretch, but bear with me) Mike Nelson, a local Denver meteorologist, used a Peyton Manning analogy when explaining the difference between weather (i.e. it’s cold today) and climate (i.e. but the long term trend over decades is warming):

“The climate is changing and warming due to increased greenhouse gases. However, there is a big difference between weather and climate. Weather is one play in a football game. Climate is the history of the NFL. Climate change is adding Peyton Manning to your offense. (my BOLD) In other words, we are juicing the atmosphere and we will likely see an increase in extreme weather. Ninety percent of what we see is natural variation. The ‘Peyton Manning effect’ is the extra 10 percent. What this means is that a heat wave might be just a little hotter. A drought just a bit dryer and an extreme precipitation event just that much wetter. You might say that 5 percent to 10 percent is not a significant amount. But imagine what that means in a 10 percent drop in crop yield or a 10 percent less water in our reservoirs during our drought or 10percent higher stream flow.”

You know what? I like this analogy so much, I’m giving the Broncos a TD on this one!

WHOSE UNIFORMS ARE GREENER?
The Seahawks colors are Green & Blue; the Broncos do not have green in their color scheme at all as they feature Orange and Blue. 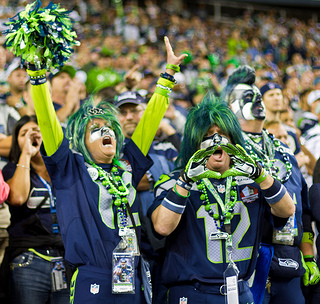 The odds for Super Bowl XLVIII favor Denver and the Peyton Manning Effect ever so slightly–the Broncos are a 2.5 point favorite as of this writing. The Peyton Manning Effect helped the Broncos in the Green Super Bowl I as well, but was not quite enough to overcome Seattle’s strength in terms of being the greener city, playing in the greener stadium and having green in their color scheme. In a well-played contest between teams representing two of the greenest cities in the NFL, Seattle takes the first Green Super Bowl, 32-26.