“I’ve looked at the science myself, I’ve read as much as I can, and I’ve talked to a lot of climate scientists. I believe with absolute certainty, and 99% of climate scientists would agree with this, that the climate change we’re experiencing is human-caused, and if we don’t do something about it, the world is going to enter an age of great chaos and human misery.”

From James Cameron, the director of some of our favorite films – Avatar, Titanic and Terminator – along with some of our favorite stars, including: Harrison Ford, Don Cheadle, America Ferrera and Matt Damon, comes the Years of Living Dangerously, a groundbreaking SHOWTIME docu-series exploring the human impacts of climate change.

We are excited to help promote this innovative docu-series, which is a collaboration between some of Hollywood’s biggest stars as well as some of our leading national news journalists. Together, these well known personalities will be providing reports of people affected by, and seeking solutions to, climate change. The hope is that this series will attract not only seasoned Climate Mamas and Papas, but others who don’t have the breadth of knowledge about climate change that many of us in our ClimateMama community already have. As part of the old adage, “if you tell two friends and they tell two friends, and so on and so on,” the hope is that we can all help engage more people in working on innovative solutions to our climate crisis. While the news from the IPCC is stark, hard to take and frighting, events like this offer hope. The series is set to air on April 13, 2014 on SHOWTIME; but we have special news about a sneak peak preview for you!

We want to let you in on a little secret, and a “sneak peak FREE preview!” On April 7th, you will be able to watch the entire first episode. We are told it may well be the Last Stand, with Harrison Ford. In this episode, Ford travels to Indonesia to investigate how the world’s appetite for palm oil – an ingredient in everything from candy bars to laundry detergent – has led to massive deforestation and turned that country into one of the world’s largest emitters of greenhouse gases. 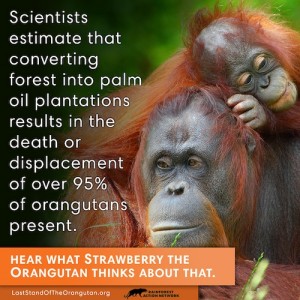 As our ClimateMama community knows, this is a story near and dear to our hearts. We have written about the connection between palm oil and climate change for our partner, the Rainforest Action Network, and in support of their In Your Palm, SnackFood 20 campaign.

Check back here on April 7th as we will be making the full first episode (whichever episode ends up being released first..) available here on ClimateMama. Years of Living Dangerously shares 16 climate change stories, told from the human perspective, that will be available on Showtime over 9 weeks of programming.

We are also so pleased to let you know that, beyond being a great opportunity to learn more about how we humans are changing our climate, Years of Living Dangerously will also offer opportunities and ideas on how to get involved and create positive change. Years of Living Dangerously will be sharing ideas on solutions we can put into action now to address human caused climate change that will make our now, our future, and the future and now of our children, a more livable and hopeful place.