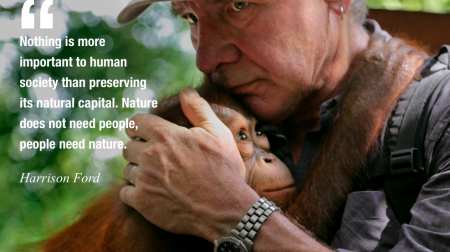 Join us NOW and be one of the first to watch the season premiere of the Showtime documentary series on climate change, Years of Living Dangerously. This first episode follows Harrison as he travels to Indonesia to investigate how the world’s appetite for palm oil – an ingredient in everything from candy bars to laundry detergent – has led to massive deforestation and turned that country into one of the world’s largest emitters of greenhouse gases, THE driver of human caused climate change.

We also see actor Don Cheadle connect the dots on the drought in Texas, cattle farming and food processing. We hear from New York Times veteran correspondent Thomas Freidman as he looks at the connection between war, famine and climate change through the lens of the Syrian humanitarian crisis and civil war. Grab the kids in your life, and watch it now!

As our Climate Mamas and Papas know, we’ve been connecting the dots between climate change and all three of these issues for some time now, but having Director James Cameron and these powerful public figures share the facts in words and pictures, is incredibly powerful.

The team at Years of Living Dangerously is also developing some wonderful educational tools and resources to help you continue the conversation.

With the release of the latest working group report of the United Nations Intergovernmental Panel on Climate Change on April 1st, and the dire and difficult facts that it shared, we are heartened by this powerful reporting by mainstream media that is now taking place on climate change and our role in causing it. On April 6th, Ann Curry and NBC News aired a primetime one hour special on climate change, Our Year of Extremes. Check in with us for information on reruns of this NBC special, as it was powerful, important and incredibly well done, as well.

Remind your kids, as we know from Spiderman, with “great power [knowledge=power] comes great responsibility.” There is NO debate, we are living climate change now. Tackling it, and creating a livable future for us all, presents many challenges. Yet these challenges bring exciting opportunities for us to change the crash course we are on, and reshape the future. Help your friends, family and colleagues be part of this exciting opportunity as well.