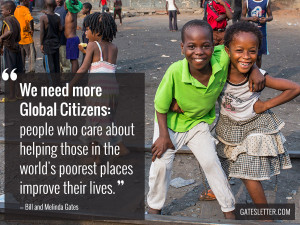 At the start of each New Year, Bill and Melinda Gates outline their goals for their organization – the Gates Foundation – in an Annual Letter. In their 2015 letter, released on January 22st, they also share their goals and hopes for the next 15 years.

As Climate Mamas and Papas, we know full well that the impacts of climate change, which are already upon us, can throw the best laid plans into upheaval. It’s interesting to note that this year’s Gates letter is predicated by the following statement on climate change:

“It is fair to ask whether the progress we’re predicting will be stifled by climate change. The most dramatic problems caused by climate change are more than 15 years away, but the long-term threat is so serious that the world needs to move much more aggressively — right now — to develop energy sources that are cheaper, can deliver on demand, and emit zero carbon dioxide. The next 15 years are a pivotal time when these energy sources need to be developed so they’ll be ready to deploy before the effects of climate change become severe. Bill is investing time in this work personally (not through our foundation) and will continue to speak out about it.”

Some of the highlights in the Gates 2015 Letter include the following breakthroughs:

• Half as many kids will die, far fewer women will die in childbirth, and people will live healthier lives because we’ll beat many of the diseases that sicken the poor
• Africa will be able to feed itself
• Mobile banking will help the poor radically transform their lives
• Better software will help all kids, no matter where they live, receive a world-class education.

You can read the entire letter here.

The Gates close their 2015 letter by calling on all of us to join them as “Global Citizens” – informed, passionate individuals working together to form effective movements for change. People who care about helping those in the world’s poorest places improve their lives.

Beginning with the September 2014 Peoples Climate March in New York City and continuing with the outpouring of support for the Black Lives Matter campaigns, we in the United States have shown clearly how we are all connected and how all our issues and concerns overlap and are intertwined. 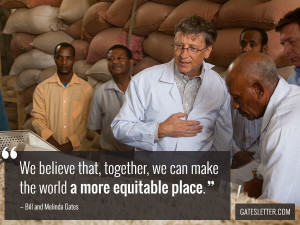 Our American Climate Mamas and Papas list income inequality, poverty, health, energy, security, access to clean water and clean air as pressing issues which are all impacted and exacerbated by the climate crisis. These are the same concerns wrapped up in a slightly different package the world over. To address these concerns requires many actions, plans and solutions from a wide range of participants. But by connecting the dots, and learning from one another we can together make the world a livable and sustainable place for us all. It’s exciting to see that organizations like the Gates Foundation are helping us all connect these dots. Learn more about the Global Citizens campaign and consider signing up. We have!

We are pleased to share this post as part of the Global Team of 200, a highly specialized group of members of Mom Bloggers for Social Good that concentrate on issues involving women and girls, children, world hunger and maternal health. As we often discuss here at ClimateMama, amplifying our voices is key to raising attention to pressing issues. Through the Global Team of 200, we at ClimateMama share and help “connect the dots” on how climate change exacerbates problems in both developed and developing countries.

The Bill & Melinda Gates Foundation is one of the largest private nonprofits in the world. Guided by the belief that every life has equal value, the foundation works to help all people lead healthy, productive lives. In developing countries, it focuses on improving people’s health and giving them the chance to lift themselves out of hunger and extreme poverty. In the United States, it seeks to ensure that all people—especially those with the fewest resources—have access to the opportunities they need to succeed in school and life.