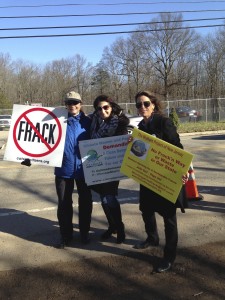 We are honored to share this post, which we wrote with our dear friend and Climate Mama extraordinaire, Linda Reik. We wrote this post in early February 2015, and have been trying since then to get it published in a national newspaper. We aren’t sure why our mainstream media wouldn’t help us share the facts on this one, we thought we wrote a great piece! But we ask you, our Climate Mama and Papa community, to help us share our story and the stories of thousand and thousands of Climate Mamas and Papas around our country who are fighting back against fossil fuel infrastructure expansion and who are living with it’s impacts everyday.

We are your mothers and your sisters. We are your neighbors, your co-workers and your friends. At different times in our lives we have been called farm worker, engineer, professor, economist, scientist, daughter, and mommy. What we have never been called, until now is: pipeline and fossil fuel infrastructure expert, Federal Energy Regulatory Commission (FERC) authority, activist or terrorist.

These are new names for us, as we work to understand what is happening in our communities. We are pulling together studies, stories and testimonies of people who live in oil and gas producing states across our country and in proximity to fossil fuel infrastructure like gas-fired electricity plants, pipelines, compressor stations and waste stations. We are listening closely as we hear repeated accounts about children who are ill, crops that are failing, tainted water, farm animals whose progeny die young, incessant noise, dust and smells in the air, and declining property values which threaten our ability to insure our homes and businesses.

We search for answers to indigenous leader Winona LaDuke’s statement: “Someone needs to explain to me why wanting clean drinking water makes you an activist, and why proposing to destroy water with chemical warfare doesn’t make you a terrorist,” but we come up empty handed. 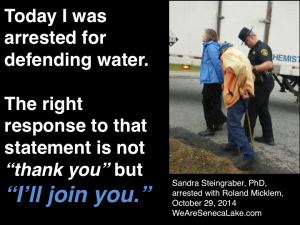 We have begun to think of creative ways to have our voices heard, and have even put our bodies on the line at non-violent direct actions, speaking out for what we know to be true as we try to raise the alarm that few citizens and even fewer elected officials are listening to. We are now discovering that our actions have been noticed, but rather then working with us to drill down on the facts, they have caused some government bodies to label us as possible “terroristic threats.”

By necessity we have come to know the ins and outs of the Federal Energy Regulatory Commission (FERC), the names of pipelines and their routes, where they connect, if they are attached to a compressor station, if they are headed for an LNG export facility, if they carry gas or oil, which direction they will flow, where they are to be sited, what bodies of water they are going to cross under, and more often than not, we also know their FERC projects docket numbers.

Sadly, we often know more about the plans for these infrastructure projects than we do about what is happening in the lives of our sisters, our brothers, our best friends and our children. Of late, we have been joining forces with others in neighboring communities and states that are living along the same routes of the same infrastructure projects that pass by us all, through our towns and across our properties. 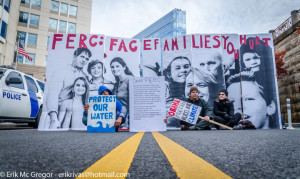 We are watching also, as FERC, until recently a relatively obscure independent federal agency, has been thrust into a hugely important role of overseeing the expansion of our country’s natural gas extraction. According to the FERC website: “To avoid any undue political influence or pressure…there is no review of FERC decisions by the President or Congress, maintaining FERC’s independence as a regulatory agency, and providing for fair and unbiased decisions.” In addition, the website states: “the Commission is funded through costs recovered by the fees and annual charges from the industries it regulates.” This last sentence bears serious consideration. FERC’s annual budget, which was over $304 million in 2014, is 100% dependent on the fees and charges it assesses to the industry it regulates.

FERC regularly holds educational seminars and events with industry allowing for easy access to FERC commissioners and staff. Yet, as public citizens, it is very difficult, if not impossible for us to meet with FERC officials and speak at FERC meetings. It is cumbersome, time consuming and complicated for us to become interveners on a FERC docket. The public cannot compete on the same footing with the legal, technical and financial backstopping that industry has at it’s disposal. Therefore the information that FERC receives is heavily industry focused. And FERC appears to accept and publish documents in its name that are primarily drafted by the industry it serves.

To be sure, FERC currently has the authority and wide latitude to interpret the rules under which the Commission was established. Its officials have stated that the Commission is not required to consider the upstream or downstream impacts of the projects it approves. It doesn’t consider cumulative impacts or how one project fits with the next. In August 2014, Cheryl LaFluer, FERC Acting Chair, more clearly defined this role: “What we have said is that we believe under [the National Environmental Policy Act, NEPA] that we look at the direct project impacts, we do not do a cradle-to-grave, molecule-by-molecule analysis of where a fuel is coming from, what’s going to happen at the end of the ship when it goes off to the other side of the Earth and what other fuel it displaces.” Continuing, LaFleur said: “We don’t believe that’s in our authority or in our role under NEPA.”

LaFleur was also quoted at a National Press Club event on January 27, 2015 saying: “I believe meeting the goals of the Administration’s Clean Power Plan will also lead to construction of a lot of new natural gas generation.”

So, here too, we are watching with disappointment and concern as the Clean Power Plan, set up to lower our country’s heat-trapping greenhouse gas emissions and to act on climate change, has as one of it’s four established pillars anchoring the President’s climate plan – shale gas, a fossil fuel. Just as corn ethanol was at one time seen as a way to “clean up our climate, ” shale gas is wrongfully being touted as a bridge and solution to our climate crisis, rather than simply as another nail in our collective coffin. Natural gas – a fossil fuel that the world’s climate scientists have told us must stay in the ground if we are to have hope for a livable future – is instead being promoted as a viable climate “solution.” Shale gas is the “genie” that must be kept in the bottle – for so many reasons – yet it continues to tempt us with partial truths in paid advertisements, as it maneuvers to convince us to remove the cork and let it out.

Federal rules allow for the dramatic expansion of shale gas production in our country, and gut previous rules for reporting and protecting us from toxic chemicals; effectively exempting the gas and oil industry from regulations that all other industries must adhere too. As long as industry complies with the rules, the bigger picture – our health, clean water, clean air, our security and our future, doesn’t count. The mandate and reach of FERC must be revisited and revised by Congress. We must connect the dots at all levels and jump into the future now, there is no bridge, there is only a cliff. There is no Planet B.

This wasn’t part of our plans when we put down roots in our communities and birthed our children. But this is where we find ourselves now; experts on technical topics we never imagined. We have discovered that there is no one minding the store. We are still your mothers, your sisters, your neighbors, your coworkers and your friends. But we also see what’s at stake and we are standing up, speaking out and fighting back. Our children know this and they are watching.

P.S. If this makes you mad, sad and wondering what you can do, please join us in Washington DC from May 21-29th, as part of the Beyond Extreme Energy actions. We will be joining other Climate Mamas and Papas from around the country – families from frontline communities. All of us are “frontline communities” in the fight against climate change. If we hope to slow down climate change and create a livable future for our children, we must demand a “time out” on fossil fuel expansion, and all it’s infrastructure. We will be calling on Cheryl Lafluer, herself a mother, to reconsider her narrow interpretation of FERC’s mandate, and stand with us, as we stand up for our children’s future and now. Our children our watching.