More than Scientists: Parents, Climate Change and Our Collective Responsibility 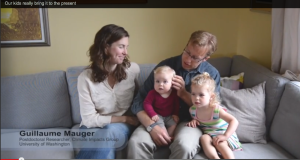 As parents, our ClimateMama community is well in tune with our collective and individual responsibilities as parents; to create as safe and secure a future and now that we can for our children and ourselves. We have done the research and we are attune to the changes around us. Our climate and our planet are both changing and in many, many ways not for the better. We know intellectually and intuitively that we humans have a direct role in creating these changes, and we also know we can have a direct role in slowing these changes down.

There are parents among us – scientists and researchers – whose work and studies show them without a doubt, that our actions are causing our planet to change. These parents are raising their voices with us – using their authority as scientists and their studies and research as the basis of their call to action – for their children and ours.

We are therefore thrilled and honored to be part of the launch and promotion of a new website, More than Scientists which shares the stories of accomplished scientists, who beyond their lab coats, are community members, parents, and concerned citizens, just like all of us. It’s personal for these scientists; they are speaking out even as they face personal threats and attacks for sharing the truth. For many of them, their children give them their courage and inspire their hope. They, as we do, hope desperately that we will all come to our senses before we force our planet and ourselves to a point of no return. Please join me in supporting these brave men and women; let’s applaud them and encourage them to keep their voices strong and loud – we need them to speak out so that we all can act.

Take a moment today, and watch one or all of the many very special videos from More Than Scientists. Share these videos with the kids in your life and check back often to catch new videos as they are released. Today we chose to share this video “A Penguin for Avani” with you.

A Penguin for Avani from Marcus Eriksen on Vimeo.

Dr. Marcus Eriksen, Director of Research from the 5 Gyres Institute made this for his 2 1/2 year old daughter. Like all the dedicated scientists that More thanks Scientists showcase, Dr. Eriksen often finds that his work takes him away from his family, as he and his colleagues work diligently on studies and research that provides us with the knowledge and data we need to spur change and create climate hope. Climate change is the greatest threat any of us will ever face. It also presents many incredible opportunities too, as personally and collectively we can change the future for the better, if we begin now.

As we watch nations around the world gear up for UN international climate negotiations in Paris in November 2015, binding negotiations and commitments are the key and our hope for a livable future. The time to speak out and demand action is now. Here in the United States, as more candidates begin to declare their intention to run for President of the United State, our elected leaders need to hear from us that WE WILL NOT stand for, nor vote or support ANY climate deniers in elected office. Our children our watching and their future and now is in our hands.

Recently, I had the privilege of attending a NJPPN lecture by world-renowned scientist Kevin Trenberth. I asked Dr. Trenberth how he dealt with the personal attacks that he and his colleagues face. Dr. Trenberth was very frank in his answer. He said that he regularly is at the front line of personal and professional attacks from climate deniers, in the media, at his place of work and on his personal e-mail. But instead of discourage him, he is spurred on to speak out and to share his research. He said that many of his colleagues face these same attacks as well. These attacks are often amplified when new studies are published. Understandably, these attacks are incredibly hard to take, and these brave scientists and their families suffer. Sadly, many scientists have pulled back from discussing their work publicly. Many scientists do persevere though, and continue to speak out like the brave men and women who we meet in the More than Scientists videos and like Dr. Trenberth.

All of us in the ClimateMama community stand in solidarity with these brave men and women who tirelessly and often against difficult odds continue to speak out and stand up for all our children, for our future and for our now…