A Healthy Planet for my Granddaughter to Grow up On 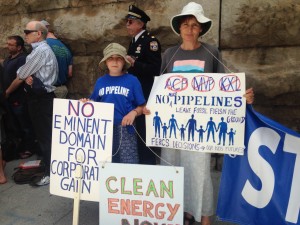 Virginian Mom and daughter, Washington, May 2015

ClimateMama took part in the Beyond Extreme Energy (BXE) actions in Washington, DC, from May 21-29, 2015. Over 70 organizations – big and small – individuals, families and new friends from all around the country came together to call out the Federal Energy Regulatory Commission (FERC). Instead of moving us towards a new, powerful reliable and renewable energy system, FERC seems stuck in the past, approving new and massive fossil fuel infrastructure projects which are hurting our communities, our children’s health, our environment and our future. It’s time for a change.

Regularly, at events organized in our nation’s capital, as well as at events in communities all over the country, ClimateMama has the privilege and honor of meeting many strong, brave and dedicated individuals who have their eyes wide open; making connections between what is happening in their communities and how this is and will impact our future and that of our children.

In my home state of New Jersey, I have had the honor of watching in action and getting to know Diane Wexler, one of these very special individuals. Diane is a mother and grandmother, as well as the co-founder of Northjersey Pipeline Walkers. Diane travels around the region helping others understand what has happened in her own backyard and how to connect the dots between what is holding us to the past and the amazing opportunities that are right in front of us – if only we just opened our eyes. Diane is a Climate Mama extraordinare who personifies our motto: “tell the truth, actions speak louder then words, and don’t be afraid.”

Join us as Diane shares some of her thoughts, her hopes and her dreams… We know that if Diane has anything to do with it, the future is indeed a hopeful one for us all.

I need a healthy planet for my granddaughter to grow up on.
Thoughts by Diane Wexler 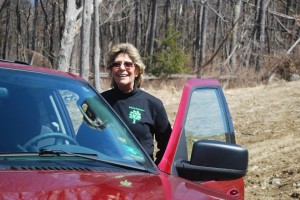 I have seen first hand and stood on a pipeline under construction and I have seen the absolute destruction and lack of respect for this planet. I have seen streams choked to death because of the dust and dirt kicked up during construction. Now in our New Jersey state park, we have a 200 foot wide swath that runs all the way from Montague (at the Delaware river) through to Mahwah in Northern New Jersey, all for a 36″ pipe.

We found on the line an interoffice memorandum stating they had no plans on re-planting. Even though New Jersey has a No Net Loss Law (which requires that trees are replanted when removed due to construction). Further, no one took into account what the wind shear would do. Not only wasn’t the 200 foot width considered that Kinder Morgan’s 36 inch Tennessee Gas Pipeline (TGP) took, but also the collateral damage that has occurred seems never to have been thought through either. So, we are talking about deforestation here – in New Jersey. When we walk through the State park now, there is no life in the area of the pipeline. TGP had loggers come in and strip the land, they then scrapped all the loam of the planet and sold that also, we have pictures of them loading up their trucks. So even if they try and grow something, there are no nutrients in the ground to sustain life.

The operating temperature of the pipeline never came into question, yet it should have. I have gone out on 3 degree days documenting the ground temperature right above pipelines where no snow will stay. On a 3 degree day, the ground temperature was 86 degrees or better. The ground was not frozen. The pipeline runs anywhere from 90 to 125 degrees or better. So now we have at least two wetlands dried up. The third and largest one is now a mud hole and drying up. In over 4 years it has not been able to repair itself, and the ecosystem disappeared because of the pipeline. I have the operating temperatures document from Tennessee Gas. I have photos from all over Massachusetts where they are documenting snow melt — also along a TGP line. These pipelines are cooking our planet from the inside out. 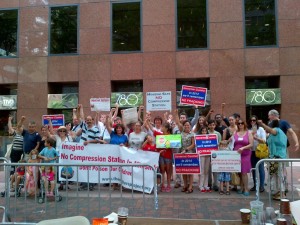 But these are just my thoughts. Do you have children/grandchildren….someone who will need a hospitable planet to grow up on?

Diane Wexler is co-founder of Northjersey Pipeline Walkers a mother of two and grandmother. Diane has become active, involved and a true champion for people and the planet after witnessing first hand a total disregard for anything in the path of “fossil fuel” development.