Climate Fast: Slowing DOWN To Speed UP Climate Action, on The Road to Paris and Beyond 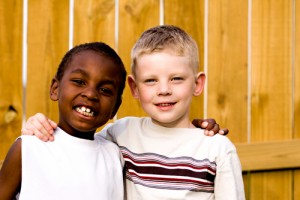 Just before or just after Labor Day, the rituals of daily life begin again for parents around the country. For parents with school-aged children the month of September is traditionally ushered in at “warp speed,” as we move forward full steam ahead and the lazy days of summer quickly become fuzzy and distant memories. With the ringing of the first school bell, a hectic existence begins in many family’s lives: we get up early, get breakfast on the table, get our children to school, begin our work inside and outside of our homes, pick up our children, take them to their extra curricular activities – soccer, dance, after school clubs – with hopes for a dinner together, even just a few times a week. Even for many of our Climate Mamas and Papas, who already understand, care and act on climate change regularly, life seems to get in the way and our actions in the face of the urgencies of the crisis can gets lost in the day to day actions of just living life.

Every day though, little things do jolt us out of the rituals of daily life and remind us of the unfolding crisis and the need to sustain actions – Syrian refugees, escaping a war put in motion by years of drought and agricultural collapse; extreme droughts on both coasts of the USA with water rationing, no snowpack build up, and fears of no water to drink come the winter; forest fires in Washington State and California – ignited and exploding in forests that no longer see rain. 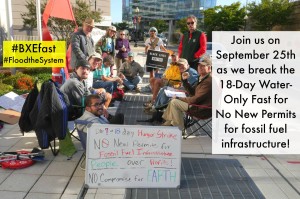 We know we all must do what we can, and then do more. And we do the best that we can. Or do we? As Margaret Meade reminds us: “Never doubt that a small group of people can change the world, in fact it is the only thing that ever has.” We want to introduce you to a small but powerful group of people camping out in Washington DC, who after Labor Day did not go back to work, to school, or to their hectic lives, but instead took on a dangerous and compelling role, “Fasting for No New Permits.” These special folks, deliberately and with thought and purpose, slowed down their daily lives to embarked on an 18 day fast, taking in only water and thereby focusing attention on the role of the Federal Energy Regulatory Commission (FERC) in perpetuating and accelerating our present day climate crisis. These brave people, and those supporting them around the country, should be recognized, honored and acknowledged loudly and soundly. Unfortunately mainstream media isn’t doing this, but we hope that with your help and with other alternative media sources, we will bring their story the attention it deserves.

The cohort of fasters consists of people from their 20’s to their 70’s, hailing from all across the United States, and from all walks and talks of life: all identify as part of a group called Beyond Extreme Energy (BXE). Over the past year, BXE has effectively put FERC in it’s crosshairs, waking up many in the United States to the damning role that this quiet, independent, quasi government organization plays in perpetuating our reliance on fossil fuels. ClimateMama is proud to be a supporter and endorser of BXE. We have met many from the BXE crew at FERC events and protests in Washington DC this past year, and we have participated in, and written about BXE actions and about the role of FERC and climate change. On September 25th, we will join the fasters, and honor them as they break there fast at noon, ET. We hope that many of you will also join us, bring a loaf of bread to share and help these brave souls break their fast too.

Below are a few quotes and statements from members of BXE, from the fasters themselves, and from writers and supporters who give us a “taste” of what has been unfolding. Many of us have been too wrapped up in our hectic day to day lives, taking our eyes away from the constant need to bring them back, along with our voices, to demand climate action. These BXE heroes have “slowed down” their lives to help us speed up, and spur real action on climate change. We are hopeful that the Pope and world leaders will also be focusing their attention, words and most importantly actions on the climate crisis, this week, next week, and in the weeks to come as we move forward on the “Road to Paris” and beyond. 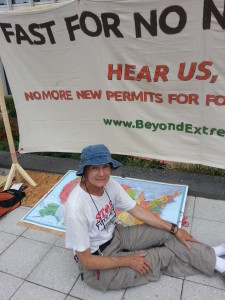 “I was on site at the FERC building for the first 3 days of the fast, not fasting, doing support for 12 fasting people. I was the first protestor to converse with a FERC employee who wanted our card of information, attached, about why the fast is on, and who said “we’re not supposed to talk with you”. I provided the card quickly and moved away. Our group was impressed that FERC was impressed enough to issue that instruction to employees! These fasters are courageous in ways I could not face at this time.” Linda Reik, Sullivan County, New York

“It’s come to this. Eighteen days of virtual starvation to draw a line under the Federal Energy Regulatory Commission’s intransigence, its refusal to do much of anything to address controversy, protest, and mass mobilization against the stream of permits it issues to greenlight gas. In other words, rubberstamp approval for the infrastructure projects it takes to transport fracked gas from the shale fields.The hunger strikers…. have already attended public hearings; made comments on the FERC dockets; organized petitions; disrupted Commission meetings; protested outside FERC headquarters for two full weeks with banners, props and art displays; and blockaded its doors, resulting in more than 100 arrests…..By the end of the eighth day, the four youngest are suffering. All of them, Lee Stewart, Jimmy Betts, Sean Glenn, and Mackenzie McDonald Wilkinson, walked in the 3,000-mile Great Climate March, but they agree: this is much more physically and psychologically difficult.” Excerpt from article by Anne Meador and John Zangas

“The Climate March was hard, but at least I could eat,” said Lee Stewart, from Washington, DC.
.
“I fasted [for] the imperiled future of my grandchildren, who will not know many of the beauties I have experienced in my life and will suffer from the effects of a compromised earth,” said Carolyn Shaw, Connecticut.

Jerome Wagner from New Jersey has three daughters, two grandchildren and “one on the way.” He fears his great-grandchildren will have a bleak future. “I’ve started to think if we don’t take effective action now, it will be irrelevant,” he said.

Anne Meador & John Zangas (The above quotes and post excerpt are taken from an article by Anne Meador and John Zangas, first published by DC Media Group. You can find the article in it’s entirety here)

“Many people, FERC employees and passersby, walk past and ignore us. But many also stop and talk, ask what we are doing, give us a victory signs, say “Thanks” or “God bless you”, ask for a flier, or simply smile. Many have also stopped and asked probing and important questions, thanking us when they leave. A group of students from a nearby high school in a peace studies class came by, and wanted to learn more….So where does all of this lead? What will all the people we have touched in various ways, all of the silent people who have walked past but read our signs saying “Day 12 of 18 Day Hunger Strike, all the police, all the FERC employees, and others – what will they do with this? Is our fast an absurd prayer which they will hear and which will touch their hearts? Will it enable them to see outside of the suicidal trance many still inhabit and which most world leaders, including our own, still embrace? Steve Norris (BXE Faster) 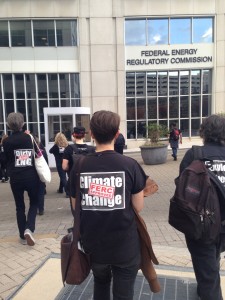 Please join me in Washington, DC on Friday, September 25th, 2015 in front of the Federal Energy Regulatory Commission, 888 1st Street NE, Washington D.C. between 12 Noon – 1:30pm. Share with your friends and neighbors, the story of these brave Climate Mamas and Papas, and what they are doing for us all. If you can’t join us in person, look for our tweets and Facebook posts. Donations to Beyond Extreme Energy are accepted on their website.