The Climate Movement, Parents, Kids and Politics in 2016

For those of us who have not yet lost complete faith in our political system, we finally have entered the very “beginning” of the home stretch in electing a new president. As Climate Mamas and Papas, we know that climate change must be up front and center as part of our next President’s agenda, from day one. Yet, we also know that the machinery in place to support a president, needs to be behind this plan of action too – or it will stall, fail or just not move fast enough. We cannot say it strongly enough: There is NO ROOM in politics for denying, doubting or downplaying the facts on climate change.

Without taking any position on any specific candidates, as we see it at ClimateMama a lot of the excitement building around the Bernie Sanders campaign seems to revolve around how he is addressing systemic problems like money in politics, climate change and energy policy. He is facing these problems directly and head on in an inclusive way. He is providing hard answers to tough questions that require everyone’s involvement. Other candidates aren’t being as candid, nor as direct, nor seemingly as inclusive. This has ignited young people around our country in a way we haven’t seen since President Obama’s run for office back in 2008. If we are to successfully address and fight climate change in a way that gives us hope for tomorrow, we have to engage everyone, and involve everyone – young and old. We need to build up an intergenerational movement, getting outside of the “box” and the partisan constraints we are currently stuck in, and we must move swiftly and directly.

Below is the second installment by Climate Mama extraordinaire, Kathy Mohr-Almeida, on supporting climate activism in children, which Kathy wrote for ClimateMama. We want to make clear from the outset, that Kathy did not write this for us with the presidential election as the primary backdrop. We are linking the two, because we feel strongly that her wise words and thoughtful examination about political behavior in the climate and environmental movements, applies equally to those people and organizations seeking our support and votes in 2016. We look forward to your feedback and ideas too.

We are at a moment in human history when there is no other choice but to fight for our children’s futures. This is a cold, hard fact, something I wish I could remain blissfully ignorant about. Hiding from the facts is tantamount to betraying my child, and I find myself in the uncharted parenting territory of youth climate crisis activism. Fortunately, I can think my way through these sometimes murky waters, find the hope, and take action.
Kathy Mohr-Almeida, Ph.D. 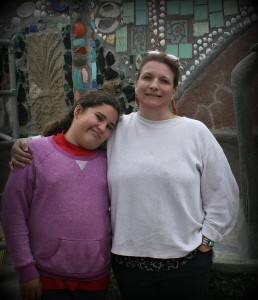 Along the way, I have noticed a few things about political behavior, which I share in hopes that you can avoid pitfalls by learning from my mistakes. The way I see it, everything goes back to Maslow and motivation. In the 1960s, Maslow created his renowned “Hierarchy of Needs.” People who are activists are typically in the upper echelons of the hierarchy because they have the mental reserves to be able to focus attention on something other than their immediate needs. If you want to create social justice, help people get their basic needs met so they can join you in the demonstration line.

What dynamics are present in youth activism communities?
People can and do use their children for political leverage. If you want to sleep well at night, don’t do this. Be aware of what the motivations are in any climate activism community your child may become involved with. I have seen it all, both on local and national levels. Some groups motivate others through exclusivity and fear of not belonging or missing out. Other groups are looking for funding and to maintain control of the benefits of the activism. Sometimes people are activists for fortune and fame, or to further another interest through the vehicle of climate activism. The grossest abuse of this dynamic is personal gain. I have seen this dynamic so many times that I have coined a term for it: Thunderjacking. It’s out there. Call it out when you see it, because it is some overtly obnoxious and exploitative behavior. 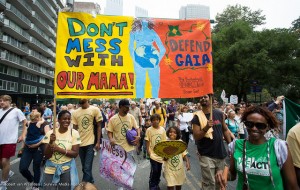 What are the hallmarks of ethical climate crisis communities?
Evidence of collaboration around group goals are a strong indication that the group is in alignment with ethical practice with young people. Discussions around power dynamics and social structures also indicate thoughtfulness about group goals. Consistent, positive behavior on the part of the community and leaders over the course of at least a year is also a strong indicator of the presence of ethical standards in a community.

In Anna’s experience, Rainforest Action Network has done an outstanding job of demonstrating equality as a guiding principle. Anna went alone to training in San Francisco surrounding RAN’s conflict palm oil campaign. RAN publically identified Anna as a “Leader” in their campaign, and at the training, Anna chose the location of the group demonstration because the team respected her scouting abilities. Where to hold a demonstration is a major decision in activism, and the team trusted Anna’s intellect and argument for the site. Anna’s contributions to the year-long campaign were valued equally.

People who follow through on what they say they will do are guided by solid ethical practice – they are considerate of their impact on others. Kelsey Juliana is THE BEST example I know of how to be in alignment with her values of humility (the cause is what is important, not my mark on the movement) and inclusion. I don’t personally know Kelsey, but am in community with one of the marchers from The Great March for Climate Action, Jimmy Betts. Both Kelsey and Jimmy completed the march in spite of difficult and inadequate circumstances. During the march, Kelsey was interviewed by Bill Moyers. I strongly recommend her interview as an outstanding model of ethics-driven activism in a youth leader.

Generosity with “lime-light” is a badge of ethically solid activists. Both Jimmy and Kelsey, at the closing ceremonies of the Great March, spoke on behalf of young people they had met along the way. Jimmy truly honored Anna’s efforts by speaking Anna’s words into the closing ceremony, rather than speaking his own thoughts or about his own greatness. People are able to share space when there is no ego-attachment to the work, when they are clearly NOT thunderjackers. These are the people who will are willing to be incarcerated for civil disobedience in support of their cause. These are the folks who genuinely realize the value and importance of equality and ethical behavior.

What is the value of diversity in activism communities?
A diverse group of advisors is paramount to effective leadership because with the diversity comes information and insight that otherwise would have been missed. Having an advisor with lots of experience in your area(s) of interest is invaluable. Having someone with fresh eyes and the ability to think outside of systems is inspiring. Having advisors with cultural heritage different from your own is intellectually and spiritually rewarding. This helps you avoid the pitfalls of unintentionally offending someone, and it helps heal the inevitable tensions which accompany differences in thought and belief. Also know this: Education does not only take place in college classrooms. The best learning usually takes place in culturally diverse encounters, and some of my greatest teachers have never stepped foot in a classroom.