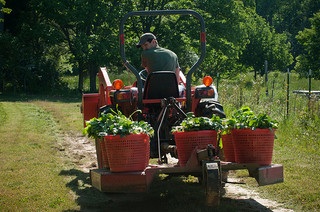 As summer begins to unfold for us and farmers market’s fare becomes both more accessible and bountiful, many of us Climate Mamas and Papas begin to reconsider and reexamine family menus and how to use more “fresh from the farm” products and produce.

The timing is therefore excellent and we are thrilled to reintroduce you to Climate Mama extraordinaire Lauri Kraft who shares with us her experience going “vegetarian” for a month along with husband and two young children. Lauri, who first guest post for us back in October 2013, is making her way around the world with her family of 4 on an amazing environmentally-focused adventure.

We had the good fortune of meeting Lauri’s husband Larry, an amazing Climate Papa, at a training for Climate Reality Project leaders in August 2013. Larry told us that not only will the Kraft family be focusing on broadening their own views and understanding of the world on their year long travels, but they are also looking forward to helping others learn more about climate change, water and environmental sustainability as they share their experiences and report back on their adventures and their discoveries.

It’s “Do Something Wednesday” at ClimateMama and we think that Lauri will give you some great “food for thought” and ideas for ACTION too! 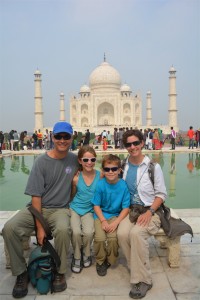 My October 2013 post focused on our son Jason, and how he convinced our whole family to be vegetarians for a month. We accepted his challenge; now that we’ve gone “veg” for a month in India, it’s time for an update on our Jason-inspired project.

And in my second round of research for this post, it’s clear to me that this experiment will permanently change our eating habits.

First, a brief history: Jason is our picky eater. He’s also a vegetarian. An exhibit on climate change led to a side discussion with the kids about how eating less meat, especially beef, is better for the environment. He challenged us to go vegetarian for a week. We thought we’d take it further and go “veg” for our entire time in India, which was exactly one month.

Veg-friendly India: Yum.
An estimated 20-42 percent of India’s population is vegetarian. Even at just 26 percent, there would be more more vegetarians in India than there are people in the U.S. On the high end, India may be home to more than 500 million vegetarians. (I’ve read on several websites that this is more vegetarians than there are in the whole rest of the world combined, but I don’t have a confirmed source for this.) 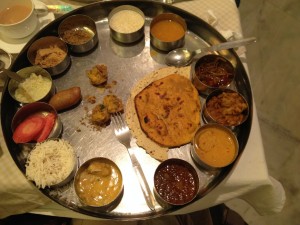 Whatever the actual number, because of the large number of vegetarians, there are a myriad of good vegetarian choices. We couldn’t have picked a better place for our experiment. Vegetarian food in India is plentiful and tasty. While carnivores in the western world may think of vegetarian food as a salad, or bland hippie-granola concoctions, vegetarian dishes in India are as varied as India’s 28 different states.

How did the kids fare during our experiment? In short, they did great, and tried lots of new things. (P.S. — if you’re trying to get kids to try a new food, sugar, chocolate sauce, Nutella and honey help it go down. I say this only partly in jest.)

I was going to write more about how the kids did, but after further research for this post, I’m compelled to write about the global impact of our appetite for meat.

The Big Picture
How does meat consumption impact the environment? This was a big part of the reason for the experiment.

According to a report from the U.N.’s Food and Agriculture Organization, the meat industry generates about 18 percent of all greenhouse gas emissions worldwide — even more than transportation. Two separate studies cite the importance of reducing meat production in meeting overall climate targets, especially with the expected increase in world population. 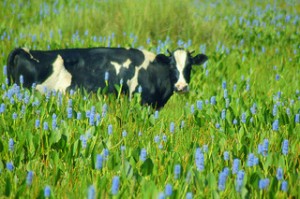 The average American eats 270 lbs of meat, per person, each year. We top the list, other than tiny Luxembourg. The U.S. consumes one-sixth of the world’s meat. Average world meat consumption, per person, is 102.5 pounds. In veg-friendly India, the average person eats less than 10 pounds per year.

The Environmental Cost
Our meat-heavy American diet produces an extra 1.5 tons of CO2 equivalents each year, per person, versus a vegetarian diet. (A note: from here on, wherever CO2 is mentioned, substitute CO2 equivalents, which includes the impact of other greenhouse gases, such as methane).

The scale of one habit, spread across the USA’s 313.9 million people, makes a tremendous impact. Our meat consumption generates more than 470 million tons of CO2 in a single year. That’s more than 941 billion pounds. 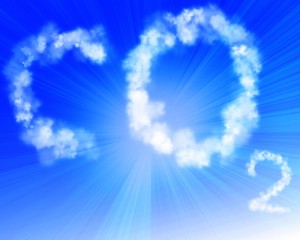 According to Time Magazine, trading in a standard car for a hybrid cuts about one ton of CO2 emissions. So by making a significant reduction in the amount of meat in your diet – especially beef – you can make as big an impact as switching to a Prius.

EWG (Environmental Working Group) makes a similar comparison: if your family skips steak one day a week for a year, it’s like taking your car off the road for three months.

The Cheese Caveat
In EWG’s list of protein sources, beef and lamb generate the most CO2 equivalents per pound: 27 and 39.2 pounds, respectively. But next on the list is cheese, which was a surprise to me. It generates 13.5 pounds of CO2 per pound — more than pork, and about twice as much as chicken. 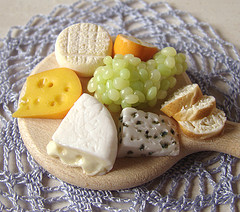 In the U.S., we eat a lot of cheese: we’re number 7 in the world, behind a list of European countries including Greece and France.

So What’s to Eat?
Michael Pollan put it well in his book, An Eater’s Manifesto: Eat food. Not too much. Mostly plants. It’s a recipe for eating that’s healthy for humans and for the environment.

Worldwide consumption of meat is on the rise. Meat consumption in countries with large populations, and large rising middle classes, is certainly a concern. But the U.S.’s impact is undeniable; a shift in eating habits here — and in policy — could make a difference in food patterns worldwide.

The Takeaway
Do I expect most Americans to suddenly “go veg”? No. But thanks to our experiment, we have some new “food for thought.” Changing our eating habits wasn’t that difficult. We had so many amazing vegetarian choices in India. And since then, we’ve had some vegetarian food that would put a burger to shame.

Did we miss meat, as a family? No. In fact, since then, even in places where meat is prominently featured on the menu, I’ve found myself eating vegetarian more often than not. And, it’s easier on the environment swapping a hamburger for a veggie burger (or lamb bhuna for chana masala).

Challenge your family to try it for a week (or a month!) and see how it goes. It’s interesting to see how quickly a change can become a habit.

For more information, EWG’s Meat Eaters Guide can be downloaded as a PDF.