On Being a Climate Activist – One Grandfather’s Heartache 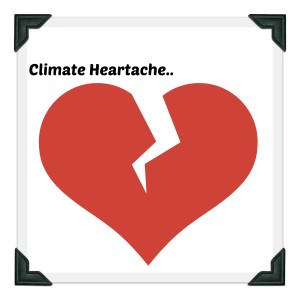 Heartache…that is what many of our Climate Mamas and Papas tell us is a constant in their lives. There is also incredible joy and hope too, but as we work on climate change education and advocacy, the heartache and grief is something we all must find a way to come to terms with.

Our friend, colleague, and fellow Climate Reality leader, Rolly Montpellier has captured many of the emotions and feelings that people working on climate change education and advocacy feel and experience, every day. In Rolly’s own words: “I could not escape my responsibility…as I headed straight towards my deepest fears and concerns..I do this for my (grand) children.” This is a statement that many of us at ClimateMama can intimately relate to.

Please set a side a few minutes and read Rolly’s story – carefully and slowly. There is no going back, but we do know that going forward, we are all in this together. We can and must rely on one another for emotional, spiritual and practical support. With heartfelt thanks Rolly, we have your back….

So if life is already difficult, why then become a climate activist? Why not just leave it alone? Why not avoid all those negative emotions – fear, pain, strife, despair – that come with being an activist? Surely someone else would deal with climate change. So why me?

Simply put, the stakes are just too high and the consequences of failure too unimaginable to not get involved. I could not escape my responsibility. Once I knew that, there was no looking back. I jumped in knowing that I was headed straight towards my deepest fears and concerns. I must do this for my grandchildren I told myself.

Since the birth of my four grandchildren, I’ve been deeply troubled by the level of environmental degradation caused by our civilization. I see all the obvious distress signals – warming of the planet, ocean acidification, soil erosion, pollution, desertification, extreme weather.

I was a recent guest on The Green Divas Radio show, discussing the emotional consequences of climate activism.

After attending the Climate Reality Leadership Corps training in Chicago in 2013, I was convinced that nothing else mattered more than tackling climate change. The full-day presentation by Al Gore truly inspired me, bringing my activism to the next level. There was no going back.

As a climate activist, I spend my days on climate action. I’m the managing editor of BoomerWarrior (my website focused on climate change), a blogger on several online sites, the writer of letters to newspapers, a member of Climate Reality, 350.Org and Citizens’ Climate Lobby. 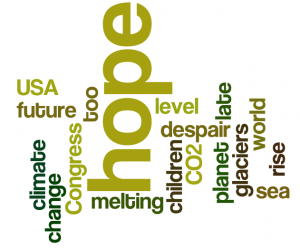 Spending my days on climate action is more emotionally demanding than any work I have ever done. However, knowing more about the science of climate and the impacts of global warming is not without emotional consequences. I often feel overwhelmed; I come face to face with existential angst and despair. I keep asking myself how did we get here? Where was I when all this was happening? How could I not see this coming? So I take comfort and solace by trying to do something about it.

Emotional Consequences
“But this work has emotional consequences,” says Dahr Jamail (Truthout staff reporter). He recently wrote Mourning Our Planet: Climate Scientists Share Their Grieving Process in Truthout.
I’ve struggled with depression, anger and fear. I’ve watched myself shift through some of the five stages of grief proposed by Elisabeth Kübler-Ross: denial, anger, bargaining, depression, acceptance. I’ve grieved for the planet and all the species who live here, and continue to do so as I work today.

I can relate to Jamail’s struggle with the reality of climate change. But we are not alone. Climatologists, researchers, scientists, journalists and activists like me are struggling with the grief of witnessing the ongoing onslaught on our planet. Whether you call it eco-anxiety, climate depression, eco-fatigue or apocalypse fatigue, the emotional stress suffered by climate activists and environmentalists can cause long-term anxieties and mental health issues. 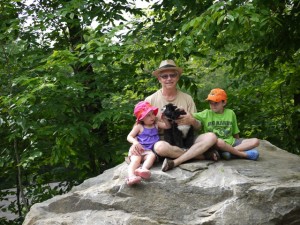 Rolly with grandchildren, used with permission

Jamail quotes from several sources:
I feel like nobody’s listening….I feel both exasperation and despair in equal measure, that perhaps there really is nothing I can do. I feel vulnerable. Dr. Helen McGregor (Australian National University’s Research School of Earth Sciences)

I find the current situation is highly distressing, in that the facts regarding global warming have been known for many decades…And I ask myself, what did we do (scientists and activists and concerned citizens of the planet), how did we get here, so close to the midnight? (Dr. Jennie Mallela with the Research Schools of Biology and Earth Sciences at the Australian National University).

As a human-being, and especially as a parent, I feel concerned that we are doing damage to the planet….I don’t want to leave a mess for my children, or anyone else’s children, to clear-up. (Professor Peter Cox, of the University of Exeter).

Like many others I feel frustrated with the current state of public discourse and I’m dismayed by those who, seemingly motivated by their own short-term self interest, have chosen to hijack that discussion. (Dr. John Fasullo, a climate scientist, the National Centre for Atmospheric Research).

Psychologists are just now beginning to take note of the profound impact of climate change on human psychology. The American Psychological Association released Beyond Storms & Droughts: The Psychological Impacts of Climate Change in June 2014. The report “chronicles the likely psychological impacts of climate change, from stress, anxiety and depression, to loss of community identity, to increases in violence and aggression.”

Anticipatory Anxiety
Our future climate reality will be one of uncertainty, unpredictability, instability and volatility. Joanna Macy believes that “the loss of certainty that there will be a future is the pivotal psychological reality of our time.” And the psychological damage is not only over what is happening now, but what is likely going to happen in the future.

The psychological toll of climate change is expected to become a global crisis. As featured in LiveScience, the 2012 report (National Wildlife Federation’s Climate Education Program and Robert Wood Johnson Foundation) predicted a steep rise in mental and social disorders as a result of climate change in the coming years, including depression and anxiety, substance abuse, suicide and post-traumatic stress disorder – an estimate of 200 million Americans exposed to serious psychological distress from climate-related events. Even scientists are getting depressed over our lack of progress.

For the first time ever, humanity is questioning how long we have left on planet earth. Ten years? 20 years? 50 years? The end of this century? As Dahr Jamail observes:

“When we allow our hearts to be shattered – broken completely open – by these stark, cold realities, we allow our perspectives to be opened up to vistas we’ve never known. When we allow ourselves to fully experience the crisis in this way, we are then able to truly see it through new eyes.

Like reaching new heights on a mountain, we can see things we’ve never seen before. Our thinking, attitudes, and outlook on life changes dramatically. It is a new consciousness, one in which we realize the pivotal stage in history we find ourselves in.”

Perhaps, within this new consciousness, we can live in this time with grace, dignity, and caring. Perhaps, here, we can find ways to save habitat for a few more species, while we share our precious lives and this precious time with loved ones, in the wild places we love so much, on this rare and precious world.