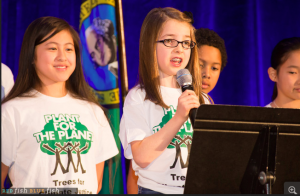 Across the country and around the world, Climate Mamas and Papas are standing beside, in front and behind their children, wherever and however needed, to raise our voices and to take action as we work to create a livable future for our children. We wanted to bring to your attention several events, around the country that urgently need your support, your help, your voice and your involvement.

We have been following closely actions by children around the country, who, with the help of their parents and other adults, are using our legal system to demand action on climate change. In the spring of 2016, representing several youths who filed a petition in collaboration with Our Children’s Trust, the Western Environmental Law Center won a precedent-setting climate change victory against the Washington Department of Ecology. The court ordered Ecology to implement a carbon emissions rule using the best available science by the end of 2016 and make recommendations to the state legislature on science-based greenhouse gas reductions in the 2017 legislative session. The court also ordered Ecology to consult with the youth petitioners in advance of that recommendation. To date, this request to consult, has been repeatedly ignored.

On June 1st, Washington State released its revised Clean Air Rule that defies the May court order and fails the children of Washington. According to the Western Environmental Law Center, the proposed Clean Air Rule, is based on outdated emissions data and only requires emissions reductions of a mere 1.7% annually, completely disregarding current science that would put Washington on a path toward climate stability.

Watch this short video and here what the kids think about the propose rule.

On June 16th, Gov. Jay Inslee’s administration appealed the Washington Superior Court decision ordering his administration to issue a rule limiting greenhouse gas emissions by the end of the year; this by one of the “greenest” Governor’s in our nation. The Governor’s appeal of the youth win in court comes just six weeks after his office and his campaign praised the decision, and two weeks after the June 1, 2016 rollout of his proposed Clean Air Rule. You can find more background here, at Our Children’s Trust.

What Can you Do?
If you live in Washington State:
1. Join the kids and their families at one of two public hearings on July 12 and 14th.
2. Submit a public comment on the proposed rule to let Governor Inslee’s administration know that the proposed 1.7% emission reductions aren’t based on science or reason.

If you don’t live in Washington State you can still get involved:
1. Support parents parents and religious leaders who will be fasting for 3 days for kids’ climate justice at the Washington State capital building, July 12 – 14 while EcologyWA hosts 2 public hearings on the draft Clean Air Rule. You can do this by fasting from your own home. Let Michael Foster, at Climate Change for Families know about your fast. You can reach Michael at: michael.foster2@comcast.net

3. Keep updated and Share posts from the Climate Change for Families blog.

Other Actions around the Country and more ways to get involved:

STOP OIL TRAINS WEEK OF ACTION: July 6th-July 12th, all over the United States. Click here for more information or to find an event near you!